Posted on March 17, 2020 by Michael Difensore Leave a comment

We now have bombshell, smoking gun evidence that the CoVid-19 “Wuhan” coronavirus was specifically engineered as an offensive biological warfare weapon, designed to target to exterminate human beings.

A new study published in the peer-reviewed journal Antiviral Research (Vol. 16, April 2020) is entitled, “The spike glycoprotein of the new coronavirus 2019-nCoV contains a furin-like cleavage site absent in CoV of the same clade.”

It reveals that the CoVid-19 coronavirus contains unique features that allow it to function as a more efficient weapon system for human-to-human transmission, which helps explain why the virus has been impossible to contain (even under “quarantine” conditions, which have universally failed in China, Japan, Korea and elsewhere).

As the science authors of the paper explain in the full text, “This furin-like cleavage site… may provide a gain-of-function to the 2019-nCoV for efficient spreading in the human population.” (Emphasis added)

Further, the science paper finds that there is no known viral ancestry to the CoVid-19 coronavirus, meaning it did not evolve from nature. It was engineered, and the science paper authors also state that the virus contains elements from MERS, stating, “Before the emergence of the 2019-nCoV, this important feature was not observed in the lineage b of betacoronaviruses.”

The abstract and full PDF (paid) of the study are available through this link at ScienceDirect.com: 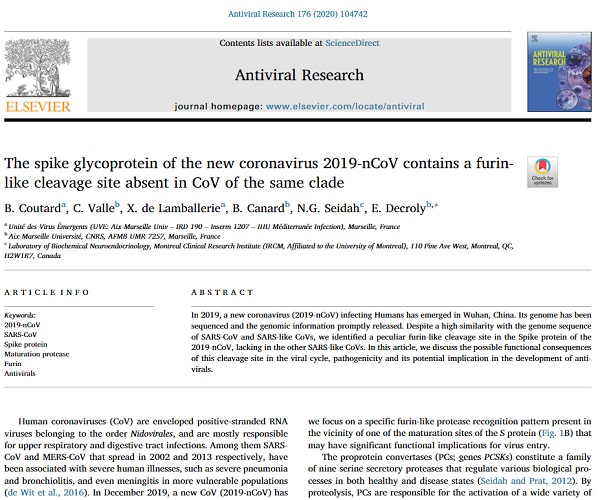 The “smoking gun” aspects of this research were brought to light earlier today by Prof. Frances Boyle who appeared on the Alex Jones Show (2nd broadcast hour, Feb. 19th, 2020, InfoWars.com) to reveal his findings that confirm the Wuhan coronavirus was an engineered biological weapon.

The following graphic from the published study shows some of the S-protein sequences found in the CoVid-19 “Wuhan” coronavirus which share a nearly identical pattern with MERS-CoV, but not with any previous ancestry of “lineage b” type coronavirus:

This feature results in, “higher pathogenicity, pronounced neural symptoms and neurotropism in infected chickens,” according to the paper. That means, essentially, it kills more easily and causes nervous system damage while infecting nerve cells. Note that many of the human victims in China appear to suffer seizures and a total, almost instantaneous nervous system shutdown, literally collapsing in seconds.

Furthermore, this enhanced property of the virus results in, “a widening of the cell tropism of the virus,” meaning it allows the virus to live and thrive in a much wider variety of human cells, including respiratory system cells. This means the virus lives in both respiratory cells and nerve cells.

Interestingly, the study further confirms that “ACE2” receptors are the vector of opportunity for the virus to infect human beings, stating, “ACE2 is also the receptor of the newly emerged nCoV.”

Additionally, the study finds that another element of the CoVid-19 virus appears to have been assembled from the SARS coronavirus, further confirming Frances Boyle’s claim that the engineered weapon is a “chimera” of multiple strains of biological weapons, including SARS, MERS and HIV. From the study: “Notably, the IFPs of the 2019-nCoV and SARS-CoV are identical, displaying characteristics of viral fusion peptides (Fig. 2).”

Engineered to attack the human respiratory system, but there may be a defense… (you won’t like it)

The CoVid-19 coronavirus is specifically engineered to exploit the biology of the human respiratory system. Again, from the paper text:

Since furin is highly expressed in lungs, an enveloped virus that infects the respiratory tract may successfully exploit this convertase to activate its surface glycoprotein (Bassi et al., 2017; Mbikay et al., 1997). Before the emergence of the 2019-nCoV, this important feature was not observed in the lineage b of betacoronaviruses.

Finally, study authors explain that people who have already been exposed to other viral infections may have enhanced immunity against the coronavirus. From the study:

…it was recently shown that in an effort to limit viral infections, host cells that are infected by a number of viruses provoke an interferon response to inhibit the enzymatic activity of furin-like enzymes.

Although we caution that this supposition is just theory (so far), it may turn out that one way to boost defenses against the coronavirus could be to get infected with a weaker respiratory virus first. Stated another way, people who routinely interact with the public and are exposed to a wide variety of in-the-wild circulating viruses may be automatically building improved defenses by overcoming other viral infections first.

This finding has huge implications for individuals who take vaccines, given that vaccines expose the human body to weakened viral strains that often fail to provoke the full response of “in-the-wild” viruses such as seasonal influenza. Although the research did not focus on this point, it might also turn out that people who routinely take seasonal flu shots could theoretically demonstrate a weakened immune response against the coronavirus, while those who avoid flu shots and allow their own bodies to naturally fight the flu each year will show enhanced immunity against CoVid-19 coronavirus.

Or, arguably, it might work the other way around, where people who routinely take more vaccines and are exposed to a wider variety of weaker strains therefore have more capacity to produce an “interferon response.” It’s too early to tell, but it certainly seems to be the case that people who are rarely or never exposed to other viral pathogens may be far more vulnerable to this one.

Click Here: A deadly viral outbreak could make it even harder for China to meet its obligations in the U.S.-China “phase one” trade deal.

Click Here: PRESIDENT TRUMPS RECORD AGAINST THE U.N. AND PUTTING AMERICA FIRST BETTER THAN ANY U.S. PRESIDENT EVER IN HISTORY.

Articles Around Internet That Support Covid-19 Is Man Made.

Click Here: FORMER PRESIDENT OF IRAN: COVID-19 WAS PRODUCED IN A LAB. IT’S A BIOLOGICAL WEAPON.
Click Here: Patent For The Development Of Corona Virus In Early Stages That Did Not Infect Humans. Bill Gates Funded This.